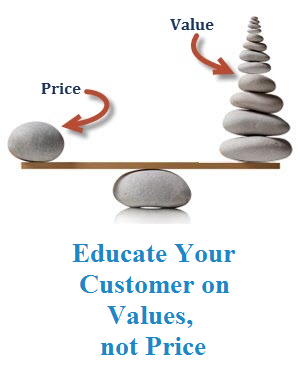 Industry leaders must be able to withstand the arrows of price competition. A leader need not be the biggest or the oldest company in its field, but it’s the one that stands out because it is recognized as the best. It wins price wars because its reputation for excellence in its field will not be obliterated by price-cutting.

A leader is usually a living and very healthy testimonial to the effectiveness of an important marketing principle: That in the long run it profits you far more to sell your product on its value rather than its price.

Almost everyone will agree with that principle in theory; but many violate it in practice. It is often so easy to pick up quick sales by promoting “special prices” or “deals”. And it is so hard to resist the temptation to fight the fire with fire when price-cutting competitors are apparently hurting you.

But when you get down and fight the “cut-price” merchandiser on his home grounds, and by his rules, you place yourself in danger of losing much and gaining little. You identify your fine product with his and destroy, in the minds of customers, some of your product’s distinctive value. You may gain short-term sales, but you are apt to sacrifice the kind of customer respect, which creates long term growth.

Perhaps the main reason more manufacturers do not sell on value rather than on price is that selling on value is far more difficult than selling on price. It requires, of course, a product that has value. But that is only the beginning.

It also requires the marketing wisdom to know what specific “image” you should create for your product to separate it most favorably from all others of its kind. Then it requires the creative skill to crystallize that image on paper and project it into the minds of prospective customers.

It requires something else, too – the lonely courage to stand out from the crowd, to tell your own story consistently, year in and year out, regardless of the opportunistic tactics of competition. Perhaps, this courage is the rarest quality of all. This quality is sometimes called Leadership.

Many companies in various industries, the leaders in their field, believe as strongly as we do that if they market products on the basis of value, rather than on the basis of price, it will pay dividends in greater long-term profits and more solid growth.