Designed for the Demanding Plastic Applications of Today and Tomorrow 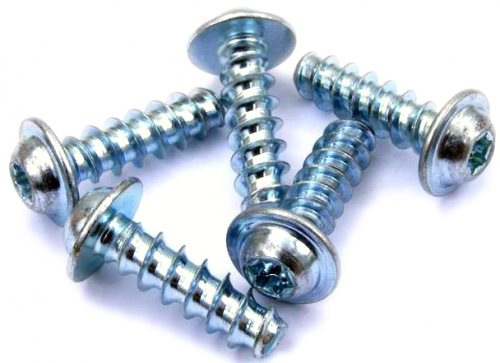 REMFORM® II™ screws employ the Unique Radius Flank™ asymmetrical thread form shown in the drawing to the right.  The leading thread flank is most influential in forming the mating thread.  The intercepting radius form on the leading flank promotes efficient material displacement and material flow.  The pressure flank which opposes the fastener head, is engineered to resist pull-out forces, whether they be applied by a tensile load or induced by torque.  The steep pressure flank has a subtle radius designed to increase resistance to pullout and to efficiently develop tension.  It also provides excellent material contact resulting in a high resistance to internal threads stripping.  In applications where the failure mode is fastener fracture, the high torsional strength of REMFORM® II™ fasteners ensures a high failure torque.  This unique thread and its narrow tip angle efficiently displace material and therefore require minimal energy to form an internal thread.  The tip also utilizes a radius to better create the internal thread without increasing hoop stress in the plastic.

The steep trailing flank on the REMFORM® II™ screw's unique asymmetrical thread form is engineered to resist pullout, whether it be applied by a tensile load or induced by torque.  When a threaded fastener is tightened, the trailing flank has to resist being pulled toward the direction of the head. Nearly all the load is between the screw's trailing flank and the adjacent nut thread's flank.  The leading thread is most influential in forming the mating thread.  The narrow angle intercepting a radius form on the lead flank promotes efficient material displacement and flow.

The REMFORM® II™ screw is strong. With a higher torsional strength than many spaced thread fasteners, REMFORM® II™ is able to utilize this strength along with its superior thread forming ability to allow deep lengths of engagement.  These deep lengths of engagement allow REMFORM® II™ to outperform other spaced thread screws since more holding power can typically be obtained by increasing the engagement length rather than increasing the diameter of the screw, which results in relatively small performance gains, at a higher cost.

In applications where screws fail by torsional breaking when subjected to ultimate torque loads, the REMFORM® II™ fastener's high torsional strength assures a high failure torque. In applications where the failure is due to the fastener stripping the nut threads, the steep trailing flank puts most of the resisting force in an axial direction as opposed to a radial direction, to increase the resistance to stripping.

The REMFORM® II™ screw was developed with total quality design in mind. Many fasteners are developed with little regard to the manufacturing processes used to produce fasteners and the limits these processes impose upon the fastener design. The result is designs that cannot be made efficiently. This results in fasteners that do not maintain their intended shape along the whole shank, have poorly filled out thread forms, or deviate erratically from the intended design specifications. These deficiencies usually result in erratic performance, hampering attempts at quality assembled joints.